There is a price for progress…

Most anyone who drives through the intersection of Highway 42 and Interstate 40 would tell you the same thing. While our community is booming with new residents and new businesses, our roads have struggled to keep up with the growth. The NC Department of Transportation has a plan to combat the traffic headache we all complain about daily, but that plan comes with consequences for many.

As construction for the new road widening project began to take way, residents of the Cleveland School area noticed many landmarks begin to disappear. The Old Drug store building, which over the years has housed a plethora of restaurants and taverns, is now an empty lot. Cleveland Auto Spa, which sat directly across the street and was a relatively new addition to our community, now also just a flat space of red clay.

But did you know they moved a graveyard? 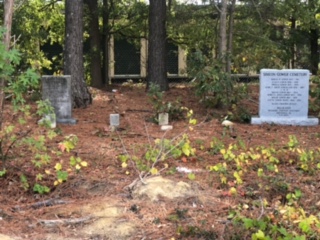 The Simeon Gower Family Cemetery sat hidden in a grove of trees and weeds, barely noticeable at all in the spring and summer, at the intersection of Cleveland School Road and Highway 42, directly across from CVS Pharmacy.

You may have gotten a glimpse during the fall and winter months when a few small confederate flags had been anonymously placed at the grave of the Gower men who served in the Confederate Army, but otherwise, this family owned graveyard has remained hidden and solitary for over 100 years.

The cemetery was part of a 56-acre tract of land that Cary Gower purchased in 1848. Presumably, he was likely the first of his family to be laid to rest in that plot in 1858. His last will and testament shows that at his death, he "loaned" his tract of land to his wife Tabitha "Bitha" Gowers, also presumed to be buried there, for her lifetime or widowhood, at which time the land would be given to his son Simeon.

I was incredibly intrigued about the process of how one removes an entire century old graveyard and re-inters its residents elsewhere. It turns out that it's all very matter of fact, and legal, and while it hasn't happened in Johnston County since 2014, is quite common throughout the state.

State Statue 65-106 tells the first part of the story. There are generally four groups of people who can request to have a grave excavated and re-interred: The US or State government, and any of its agencies, a church, a utility company, or a landowner where the grave lies. In this case, the Department of Transportation needed that tract for the new right of way.

Here's how it began.

In June of 2020, the DOT contracted a company called New South Associates to conduct a ground penetrating radar (GPR) survey of the cemetery. Attempts to speak with someone at New South were unsuccessful, however their report was filed as part of the public record with Johnston County.

The survey was an important first step in identifying where marked and unmarked graves might lie. As you can imagine, things begin to shift after a hundred years or so. The survey identified 54 potential gravesites, 2 formal headstones, 8 field stones, and 17 funeral home markers.

In their report, New South admits to taking what they call a "conservative approach" to identifying graves with GPR data, citing that not every potentially identified grave is indeed that. They note that the depressions in the ground could be the result of downed trees or other ground disturbances.

In this case in particular, future research found that they were extremely conservative. The DOT worked with Todd Johnson, Director of the Heritage Center in Smithfield in identifying exactly who might be buried on this land. Working with distant family who located a family bible, and utilizing public records such as Ancestry.com, the DOT contacted the County Attorney's office for their assistance in petitioning for the re-internment of what they now felt confident, was 19 graves.

In the interim, as per state statue, an ad was placed with the Raleigh News and Observer for four consecutive weeks in an attempt to notify any next of kin, or interested party that might want some input as to where these graves would be moved.

At the County Commissioners meeting on September 8th of last year, the County Attorney, Jennifer Slusser went before the board. Here's an exert from those minutes:

And so, with the survey done and the approval from the Board of Commissioners, the process began on September 15th, 2020, and was completed by the next day.

I spoke at great length with Denise Amato, an agent with the DOT. She serves NC as a real property agent, and almost exclusively handles the removal and re-internment of graves for such highway projects. An extremely pleasant woman, she joked that her husband was a funeral director, so the running joke in her home was that "he puts them in the ground, and I take them out".

Denise explained that any grave removal project does indeed begin with a backhoe, but that once a grave is found, all digging is done exclusively by hand. She stressed to me that the process is done as reverently and respectfully as possible, and that family is always welcome to be on site to observe the process. In the case of the Gower cemetery, lamenting that most of the family has since moved to the western part of the state, she said that one distant relative did stop by for a while, but did not stay on site long.

She then put me in touch with Jason Rhodes, a licensed funeral director from Kings Mountain, who facilitated and supervised the removal of the Gower Cemetery. Rhodes, a funeral director by trade, said he began dis-interring graves and relocating them about 12 years ago after he saw an ad in the local newspaper notifying potential family members about a site removal. He was interested in the process and it fell right in line with his existing work, so he began making phone calls to find out how he could get involved. Once approved by the state, he now actively bids on these jobs as they become available. He estimates that in that time frame, he's relocated approximately 1000 graves.

I asked Rhodes how long one could expect to still find any physically identifying remains after they'd been laid to rest, and he guessed conservatively that not much remains "after about fifty to sixty years". Curious as to how a removal is done when there technically isn't a body to remove anymore, I asked him, "So, how do you know"?

"It's a change in soil, actually the biggest aspect is compaction" Rhodes explained. After locating the proximity of the graves, and opening the area with heavy machinery, Rhodes explained that there is a noticeable difference in the compaction of the soil that will remain consistent to the bottom of the grave itself.

Everything in that area, the soil, any remaining hardware, or bone fragments they may find, are carefully placed into a child size casket, and prepared for re-internment. The child size casket is used for practical purposes, as after decades underground, there simply isn't a large quantity to remove.

In the case of the Gower Cemetery, a total of 16 remains, held in 15 graves, were located and removed. The sixteenth set of remains is believed to have belonged to an infant, buried at the feet of its mother. While the numbers originally began around 54, then quickly reduced to 19; family land records and extensive site surveys helped to confirm that the final number is correct. The residents of the Gower Cemetery were all relocated to the Riverside Cemetery Extension in Smithfield, where grave plots were available in succession. It was the family's request that they all be re-interred together. 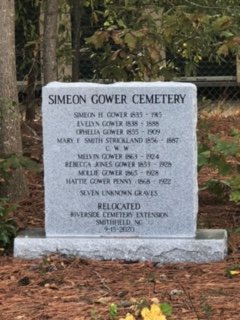 If you happen to pass by the corner of Cleveland School Road and Highway 42, you'll see a flat spot of red clay where the Gower family was once laid to rest. It used to be covered in small trees and overgrowth, but it will soon be covered in asphalt. Located just beyond where the dirt ends, a lone row of trees remain. You'll find a memorial stone placed by the Department of Transportation on what is left of the Gower family land. For posterity sake, it lists the names of the deceased who were relocated to Smithfield. Sitting alongside that stone, at the family's request, are the original headstones and footstones that once stood in the original Gower Family Cemetery.

The monetary price for progress in this case was just over $84,000.

The last documented burial at the Gower Cemetery was in 1928. Thought to be a final resting spot, the price of progress moved them all to a new location almost 100 years later.
Google Tweet Pin it
Tweet
Jennifer Konkol

Jennifer Konkol is a long-time resident of Johnston County. She was an editorial columnist for the Garner News and The Cleveland Post from 1999 until 2008 and earned recognition from the NC Press Association during her tenure there. Jennifer lives in the Cleveland School area with her husband, her youngest daughter, and several furbabies. In her spare time, she enjoys writing, getting lost in graveyards, genealogy, and a little bit of fishing.